With last week’s passage of AB 1346 in Sacramento, big changes are coming to the landscaping industry. Or not.

Here’s a Q&A to clarify what changes the bill will–and won’t–bring to California.

First of all, nothing has been banned. Nada. But first, let’s be clear on what the law does apply to.

The law covers “small off-road engines,” like gas-powered leaf blowers, lawn mowers, and weed trimmers–mostly landscape equipment. As small as some of these engines are, their impacts on the environment are huge. Automobile engines have improved a lot over the decades, but two-stroke engines not so much, and these put out a nastier mix of gases, toxins, and carcinogens which cause smog and are hugely harmful to anything that breathes, including everyone. These engines are all over the place, and they’re now causing more smog than all of California’s light-duty passenger cars.

Ok, but they’re not banning them?

No, the law would end, eventually, the sale of new ones. It says nothing about their use. So these ubiquitous machines will still be polluting for years, until they break beyond repair. And there’s nothing to stop landscape companies from stocking up on new ones before the law comes into effect.

So when would anything start to change?

The rules could come into effect in 2024, or be delayed indefinitely, until it is deemed “cost-effective and technologically feasible.” It’s already cost-effective and technologically feasible for individual landscape companies to transition to battery-powered tools–many have done so, voluntarily–but the transition statewide would require many new zero-emission tools to be available, and some other practicalities.

And even then, the old gas ones would still be allowed to tax our health, foul the air, and disrupt daily life until they die their own natural deaths.

What about the landscape workers? Won’t this raise costs and put them out of work?

Landscape workers are the ones most harmed by the current lack of regulation. They’re the ones operating these machines and breathing their emissions at point blank so that others can have tidy yards. They’re the ones most likely to develop asthma, hearing loss, cancer, neurological problems, etc. It’s a matter of basic equity–they should have the same workplace safety as the rest of us, even if it means their employer has to update their tools.

And what about landscaping companies? Will they be forced out of business? Will the mountains fall into the sea and our Way of Life disappear forever?

Many landscape companies have already switched to battery tools on their own, for the health of their employees or to avoid handling gasoline or because it leads to higher profits–the cost of buying extra batteries is more than made up for by the savings on gas. Not every company has the cash flow to make the switch overnight, but that’s why this isn’t happening overnight. Plus, the law includes money to help companies make the transition.

So what’s the upshot of this law?

The law means that, in a couple years, or maybe much later, California will start to get on the road towards getting one of the most harmful, outdated, and ubiquitous technologies out of our neighborhoods, but slowly, drip by drip.

We applaud this first step, and it sends a signal to markets and local governments that change is finally on the way. But again, the law will only affect the future sale of new gas-powered tools. It’s still up to cities and towns to pass their own local ordinances to restrict the use of them while we still live and breathe (as 35 cities in California have already done). Battery-powered landscape tools have been around for years, they’re more capable and affordable than ever, and there’s every reason to begin the transition locally now–as many reasons as there are people in your city.

Santa Cruz residents are continually sending letters to our city councilmembers asking them to do just that. Yet they still haven’t moved. If you haven’t yet done so, please take a minute to write and tell them why you want them to pass a ban on gas-powered leaf blowers. 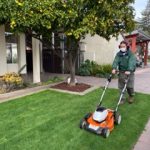 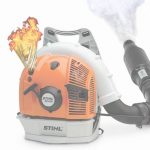 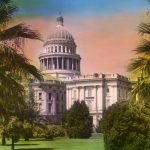 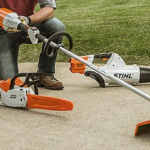 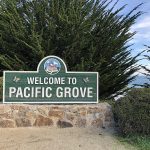 News and Updates for a New Year 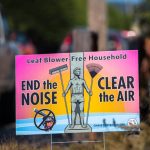 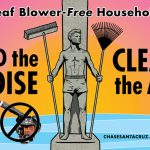 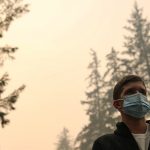